It's a bit of a crowd pleaser. Not only from the Thai, but also from many Dutch people who have lost their heart to Thai cuisine: tom yam. A spicy, slightly sour soup with garlic, lime, mushrooms, lemongrass, chili peppers, basil and coriander. Probably 'tom yam goong', the shrimp version, is the most popular, but as you know, Thai dishes always come in many shapes and sizes. So you can also sit down for tom yam with chicken, tofu or coconut milk.

A few hundred years ago the Thai poet Sunthorn Phu already wrote that the art of making a good tom yam is a desirable part of a woman's charms. Apparently, men didn't make soup at that time. Much later, King Chulalongkorn, who ruled at the beginning of the twentieth century and was in many ways ahead of his time, had the dish included as an official part of the Royal Thai Cuisine. He had become enthusiastic after he tasted it somewhere in the province.

So Tom yam proved himself. You buy it fresh in Thailand, as instant noodles or you order it as fried rice. In the Netherlands you eat it in a restaurant, it often comes from a packet, it's a bouillon cube or you make it yourself with a good pasta base. But it doesn't stop at these possibilities. The taste (and the name) can be found in Thailand, in many other Asian countries and even far beyond.

You don't have to look far in Asia to find it as a taste of rice crackers, bread sticks or prebaked toast. A large fast food chain serves fried chicken with tom yam flavor and there are restaurants with hamburgers in the same flavor. Packaged bags of fried snacks, dried fish, crispy seaweed and peanuts with tom yam flavour are on sale everywhere. Thai snacks seem to be especially popular in Japan. Tom yam is only one of the many Thai flavors there. If you feel like tom yam you can choose from instant noodles (of course), curry pastes, ramen (Japanese noodle soup), but also crisps, other tom yam salts and spaghetti. The Japanese Domino pizza chain serves a pizza tom yam. In the United States you can order your Tom Yam nuts at Amazon. Convenience serves man. 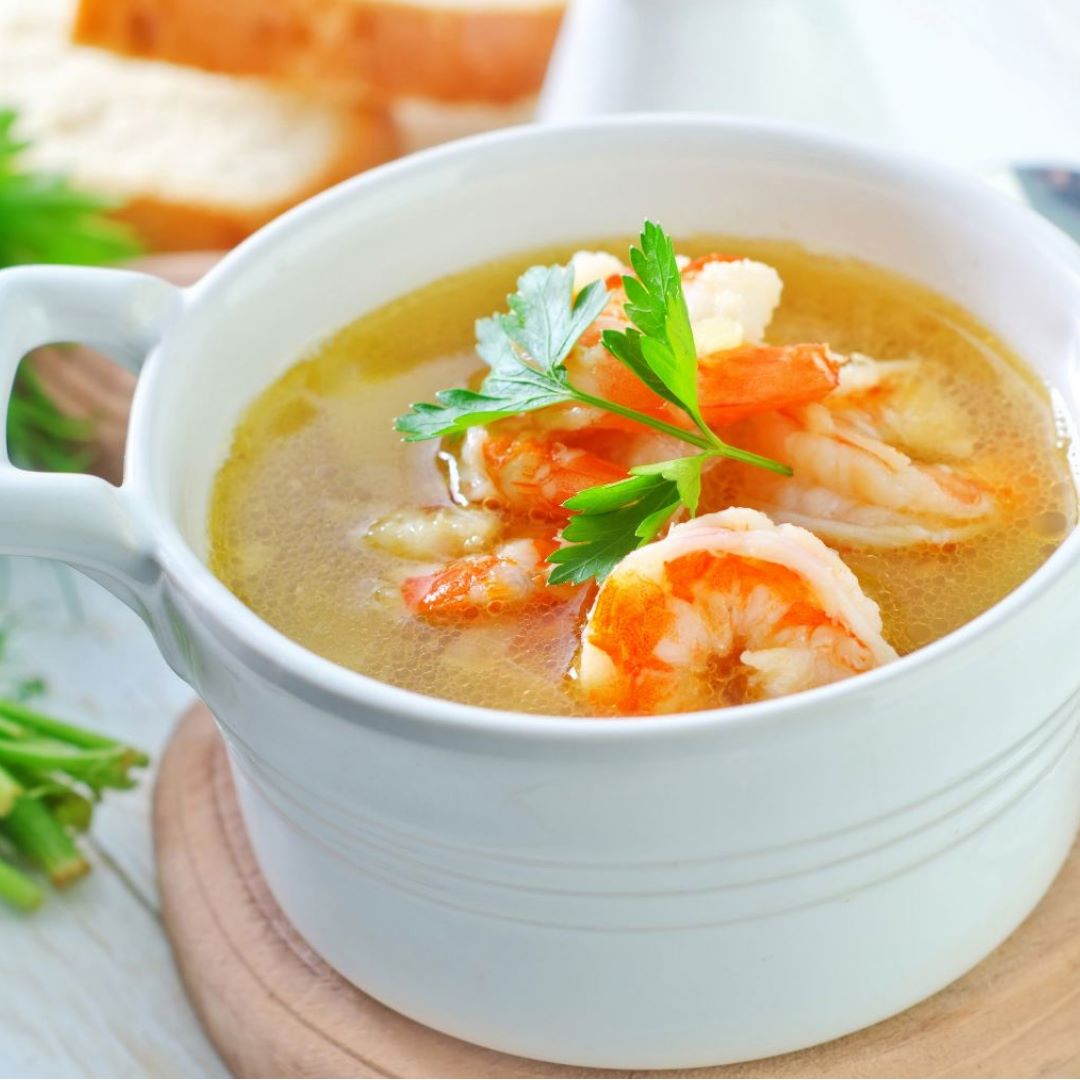 More original is the artist Vorrabit 'Bang' Pornkerd. He has designed a rather striking and perhaps not so tasteful t-shirt called Tom Yum Goong, with a kind of sexy shrimp woman on it. Hot and spicy, according to the maker.

In England there are several breweries that have made a tom yam beer.

In Wild Beer's Tom Yam Gose, a traditional German beer is supplemented with coriander and salt.

Inspiration doesn't stop with food and drink. In the well-known 'Keep Calm' poster series, which wants to make people slow down a bit, 'Keep calm and eat Tom Yum' appeared.

There are even more variations possible! In Malaysia they sell popcorn with tom yam flavor and we also found corntortillas filled with tom yam. In Thailand they make tom yam ice cream here and there! Who doesn't even want to taste that? In short: the name of the Thai tom yam is established worldwide. Take a good look and you will see many restaurants that have chosen the name Tom Yam or Tom Yam Goong, not only in the Netherlands but worldwide.

Creative spirits who experiment with the taste of liquor have also been inspired. Not only in Thailand, but also abroad you can order a tom yam cocktail in trendy bars, mostly with vodka, lime, lemongrass and chili. Sounds pretty good, right?

Brewers make it even more colourful. In England there are several that have made a tom yam beer. In the Tom Yam Gose of Wild Bear, a traditional German beer is supplemented with coriander and salt. The Thai arm is rich, also in Florida (at Tomoka) Tom Yam beer is brewed. You don't have to go that far to find it, because the Amsterdam brewer Oedipus also has a Thai beer. As they say themselves: a Thai dish caught in a triple. The beer is called Thai Thai and has galangal (ginger) and the tom yam flavors lemongrass, coriander and chili pepper.

Inspiration doesn't stop at food and drink. In the famous 'Keep Calm' poster series, which wants to let people relax a bit, appeared 'Keep calm and eat Tom Yum'. That spell can be found on t-shirts and hoodies. For the American internet store Cafepress, the end is a bit lost. They must be huge fans of Thai cuisine, because they deliver t-shirts or coffee mugs with the image of a plate of tom yam on them. For those who want to, they also have linen bags, jewellery (!) and pillowcases with the same image. 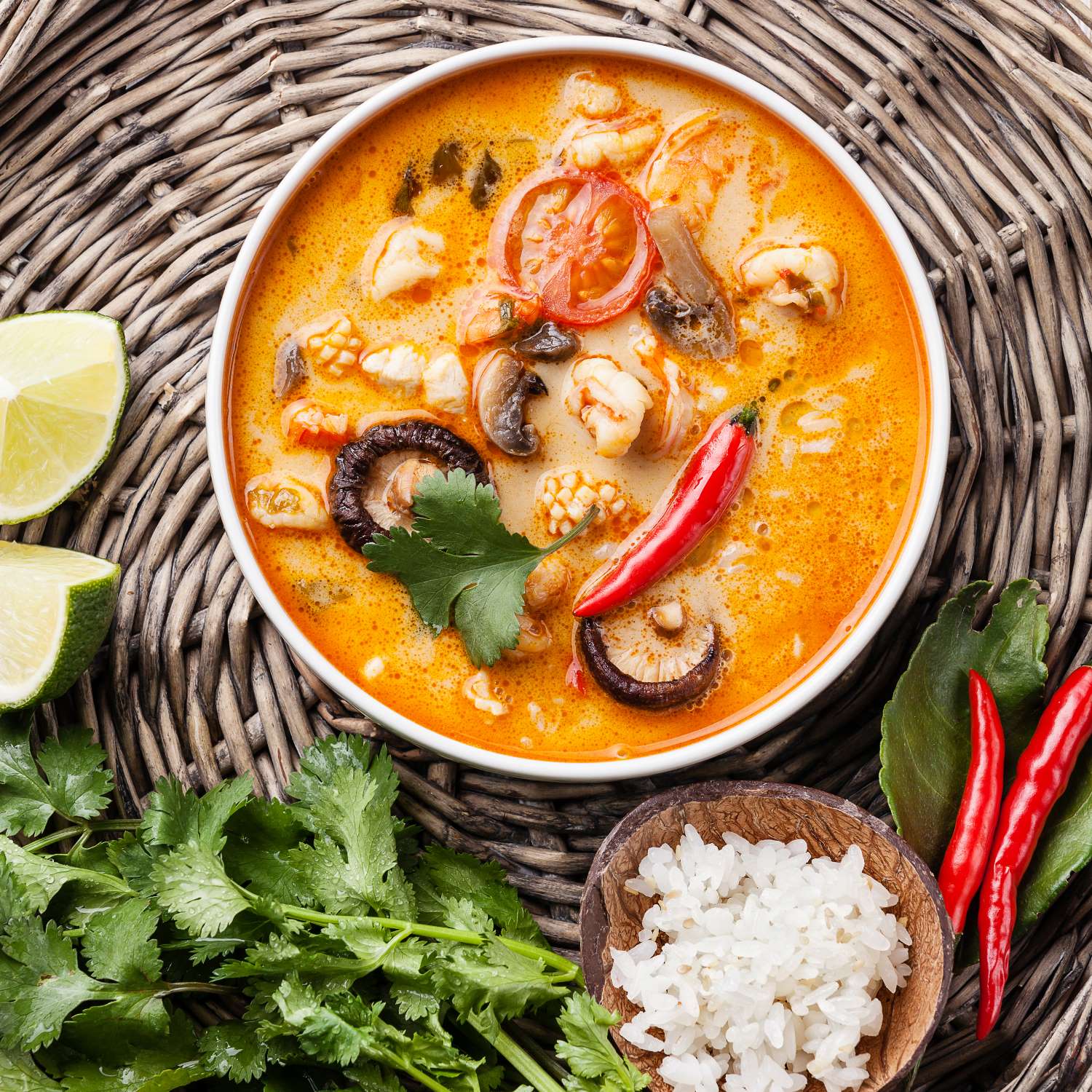 They must be huge fans of Thai cuisine there, because they supply coffee mugs with the image of a tom yam plate.

Film director Prachya Pinkaew named his action movie Tom Yum Goong in 2005, after a restaurant that plays a part in the movie.

ONOFF SPICES makes natural and organic ready-to-use Thai soups, curry pastes and wok sauces for European gourmets. The production is sustainable, with an eye for nature.

Send us an e-mail: info@onoffspices.nl